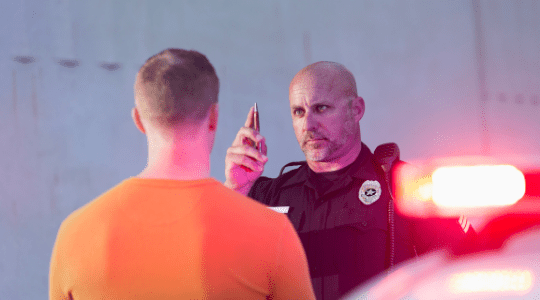 You’ve been pulled over by the police and now you’re being asked to submit to some tests to make sure you’re alright to drive.  In this article, we’ll talk about what you can expect to happen next and some of the decisions you’ll have to make.

The tests the officer is offering you are referred to as Field Sobriety Tests, or “FSTs.”  If you’ve ever witnessed a DUI stop in real life or on TV, these are the tests that include following a stimulus with your eyes, walking a line, and holding your balance while standing on one leg.

Before we get too far into the tests, it’s important to understand why these tests are used and what credibility they have in the criminal justice system.  Back in 1975, the National Highway Traffic Safety Administration (“NHTSA”) funded research to create procedures for determining impaired drivers.  This research resulted in the creation of the standardized field tests that you will be subjected to if you agree to take part in the testing.  These tests are “standardized,” meaning that there is a universal method of giving the tests to a suspected impaired driver, as well as a universal method of scoring the results.  Any deviations from those standardized procedures are grounds for an attorney to challenge the validity of the results.

​The three tests are the Horizontal Gaze Nystagmus (“HGN”), the Walk and Turn, and the One-leg Stand test.  In theory, these tests are somewhat accurate in determining whether a driver is impaired, although as you’ll soon see it’s not an exact science, not even close really.

​The HGN is the test where the officer holds a stimulus in front of your face, usually a pen or his finger, and asks you to follow the stimulus with your eyes without moving your head.  Nystagmus is the involuntary jerking of your eyes, which can be an indicator of intoxication.  Although the officer will not usually mention the three subset tests, called “clues,” that he will be giving you, there are at least three “clues” that test your ability to track the stimulus.

​The first HGN clue is called The Lack of Smooth Pursuit.  Quite simply, the officer is taught that as your eyes go from side-to-side, they should move like marbles rolling across glass.  If your eyes skip or stutter as they move, the officer will note this as a clue in his report.  Think of it as a strike against you.

The second HGN clue is called Distinct and Sustained Nystagmus at Maximum Deviation.  In this test, the officer will have you follow the stimulus until your eye is all the way to one side, otherwise known as maximum deviation.  He will hold the stimulus there for a required amount of time and will check for nystagmus.  If he says it’s there, it’s counted against you as a clue.

​The third HGN clue is called Onset of Nystagmus Prior to 45 Degrees.  In this test, the officer will slowly move the stimulus horizontally to a maximum of 45 degrees from your nose.  If he observes nystagmus prior to 45 degrees, it will be counted against you as a clue.

How Are Field Sobriety Tests Scored?

Here’s how the scoring works:  for each test, you can have a maximum of one clue per eye.  In other words, for the first test, The Lack of Smooth Pursuit, if the officer observes nystagmus during that phase of the test in both eyes, he would mark down two clues for that test.  The same is true for the Distinct and Sustained Nystagmus at Maximum Deviation test, you can be scored a total of two clues, and the same is true of the third test, Onset of Nystagmus Prior to 45 Degrees.  So, there’s a total of three field sobriety tests, with two potential clues per test, which means if you fail every test in both eyes, the maximum score is six clues.

This might surprise you, but it is unusual, at least in my experience, to review a DUI arrest report where the defendant allegedly scored anything less than six clues n their field sobriety test.  To provide some context for this strange phenomenon, keep in mind the following. Even if the defendant is recorded on the dash-cam performing the HGN, 1) the video quality is too poor to be able to see the movement of the suspect’s pupils, and 2) the officers are actually trained to have the defendant look away from the dash-camera, due to the possibility of “optokinetic nystagmus,” which is naturally occurring nystagmus as a result of viewing objects that move suddenly or show rapid contrast changes, like the strobe lights on a police car, or the approaching headlights of cars.  So, you’ll never have video evidence to refute the results of the HGN test.  At this point, it’s the officer’s word against yours.  If you exhibit even just four of the six possible clues, according to NHTSA’s research in the 70’s, there is an 88% chance that your BAC is above .08.

What is the Most Difficult Test to Pass?

The second test, the Walk and Turn, is the most difficult to perform.  As a criminal defense attorney, this test is the one that I find exceptionally difficult for even sober people to perform, and I’m happy to tell you why.

​The first part is called the Instruction Phase.  The officer will instruct you to assume a certain position and hold it throughout the rest of his explanation and demonstration.  Many people, sober or not, at some point, will take a more comfortable position as the officer’s instruction goes on and on.  I think it’s fairly normal, but the officer doesn’t have to announce to you that if you move your feet whatsoever while he’s giving the demonstration that you’ll have a clue counted against you.

​Here are the directions from the NHTSA instructor guide:

​At the beginning of the second phase, called the Walking Phase, the officer will tell you to start, and now you have to get everything right the first time.  Make any mistakes and they’ll be interpreted as indications (clues) of intoxication against you.

Here are the ways you will have clues counted against you per the NHTSA standard:

Considering all of the above clues you can be assessed, keep in mind that if you score two, JUST TWO clues, NHTSA ‘s research indicates there is a 79% chance you are impaired at a level at or above .08.

The third test, the One-leg Stand test, is a far simpler test to understand, but is also difficult for sober people to perform.  Like the Walk and Turn test, there is an instruction phase and a Standing/Walking phase.  During the instructions stage, you’ll be instructed to put your feet together with your arms at your side and to remain that way.

Here are the instructions from the NHTSA manual:

Here are the ways you can be assessed clue on the One-leg Stand test:

​According to the NHTSA manual, a person with a BAC above .10 can maintain their balance for up to 25 seconds, but “seldom as long as 30 seconds.”  Two or more clues, or failing to complete the test, is indicative, at least according to NHTSA, as having an 83% chance of having a BAC of .08 or higher.

The officer may ask you to perform other field sobriety tests, such as the Vertical Nystagmus test, have you count, or say the alphabet from one letter to another, but these tests have not been vetted in the same way as the first three.  In other words, the results of those tests as compared to a level of intoxication will be difficult for the officer to articulate in court.

How Does The Preliminary Breath Test Work?

The last test you will be asked to perform will be the Preliminary Breath Test (PBT).  This can be the nail in the coffin in cases where the results of the HGN, Walk and Turn, and One-leg Stand tests could otherwise be suppressed for flaws in their instructions, demonstration, etc.  The PBT is not admissible in court to prove you were DUI, but it is instead used to support the probable cause needed for your DUI arrest.  This distinction will be explored further in a subsequent article.

The PBT itself is simple; you blow into a plastic tube and within a few seconds the portable breath testing device will display a readout of the blood alcohol content (BAC) it detects in your breath sample.  If the amount is .08 or higher, the officer will make it a point to hold the device up to the dash-cam to make sure the result is videotaped.  When this happens, your arrest is only seconds away…

​The FSTs have one purpose: providing the probable cause necessary for your arrest for DUI.  I have seen one case, only one, where taking the PBT and subsequent breathalyzer was beneficial to a client.  In that case, the PBT indicated a BAC of higher than .08, however, when the client took the breathalyzer at the station, it registered 0.0.  Obviously one of the devices was malfunctioning, and it was for this reason that the DUI was dropped, and another charge, something like open container or consumption of alcohol by a minor if I remember correctly, was brought against my client.  That case represents a very small number of those where performing the FSTs resulted in a suspect avoiding a DUI charge.

​That said, when you’re on the side of the road an officer, who suspects you may be under the influence of alcohol, asks you to do some Field Sobriety Tests, such as the Horizontal Gaze Nystagmus, Walk and Turn, and the Stand on One Leg test, you can refuse without penalty.  Some officers will become fairly aggressive if you refuse and will try to get you to admit that you’ve had some drinks, or you’re worried about the results, etc.  Others will not even ask you to participate, they will bluntly tell you “what you’re going to do…”  You can dismiss these attempts with a simple “I’m declining to participate without an attorney present.  Am I free to go?”  If they insist on asking you to participate repeatedly, you can simply repeat your position.  Whatever you decide, just remember that the results of the field sobriety tests will be used as evidence against you.

This article is in no way intended to be, nor should it be construed as, legal advice and you should not rely on the information herein.  I’m simply sharing some random thoughts and ideas, my experience, and I’m certainly not touching on every issue that is necessary to consider for any serious legal analysis.